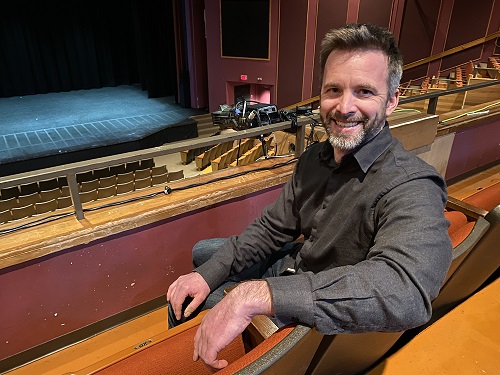 The Board of the Lester Centre of the Arts is happy to announce that they have appointed Chris Armstrong as the new General Manager for the facility.

“We’re excited that we’ve found someone who’s a good fit for the position in Chris,” said Margaret Cavin, Chair of the Lester Centre Board. “We’re also thrilled that Covid restrictions are easing, and we hope to see some good audiences in the months and years ahead!”

A resident of Prince Rupert for 19 years, Armstrong is no stranger to the Lester Centre. He has performed in many productions on the stage, from the role of Charles Hays in 2006 Homecoming celebrations, to the role of Glenn Cooper in Neil Simon’s Rumors in 2019, one of the last productions to be staged before the pandemic hit.

“I’m humbled and honoured to have been appointed by the Board to this position, and I’m looking forward to bringing more productions to the stage as the pandemic, hopefully, fades away,” said Armstrong. “Through the hard work of the Lester Centre’s employees, volunteers and Board members, the facility has become a jewel of Prince Rupert, and I’m excited to work with them to raise its stature to the national level.”

Armstrong will take over the job from outgoing General Manager John Roper, who is returning to his roots in Fort Nelson to manage the Phoenix Theatre. Armstrong’s main duties will be to ensure the theatre is in good shape to stage quality productions, and to attract audience members and rentals to the facility.

“We chose Chris because of his vision for the Lester Centre, which is inspired by his passion for theatre and for our community,” said Cavin. “Through his past work as a manager, a publisher, and an entrepreneur, he’s looked for ways to unleash the creativity of others, and we’re looking forward to helping him elevate the reputation of the theatre even further.”

Armstrong will begin the job on April 4, 2022, and he will be very busy in his first month. The Lester Centre will be hosting its first productions since the easing of Covid restrictions with the Snowed In Comedy Tour (April 20) and Ken Lavigne: 3 Knights with a Tenor (April 21).

And at the beginning of May, the BC Annual Dance Competition will be making its return to the community after a hiatus of two years, from April 30-May 7.